As changes to the CEFR Framework occur this year, this quote by Benjamin Lee Whorf comes to mind, ”Language shapes the way we think, and determines what we can think about.”

Indeed, the language you speak influences your identity – how you see the world.

–> Check out the webinar replay here: The CEFR Descriptors and Framework: Online Interaction and Digital Tools in the Language Classroom – with Prof. Dr. Bernd Rüschoff

The CEFR Framework – A common standard for languages

As digital communication continues to connect us to more people around the world, we begin to realize just how important our language abilities are for us to communicate effectively.

One effect of globalization for many industries is the introduction of more culturally diverse workforces in many places. The increase in sharing of information is only as effective as people’s ability to formulate their goals. Due to this, it only makes sense to implement a certain standard to language exchange to understand and evaluate how we utilize language.

This European-established standard is known as the CEFR, or the Common European Framework of Reference for Languages.

In this article, we will discuss how recent changes to the CEFR have altered the way we view the framework, as well as how we identify with languages. In addition, we have spoken with Professor Dr. Berndt Rüschoff, Senior Professor at the Institute for Anglophone Studies at Duisburg-Essen University who has offered his insights and solutions on successfully applying the CEFR framework in the workplace.

What is the CEFR Framework?

The CEFR Framework, or the Common European Framework of Reference for Languages is an international standard for assessing, measuring and validating language abilities. It is the most widely used and recognized language standard and proficiency scale worldwide.

The Framework’s goal is to ensure the highest quality standard of language learning, teaching and assessment for all.

The CEFR is just one of many major initiatives in the language field by the Council of Europe as a means to increase international relations and to promote lifelong learning through language education.

You will typically find six levels within the CEFR, which are A1, A2, B1, B2, C1 and C2. With these levels, a student can easily demonstrate their language ability in around 40 different languages.

As most of us know, there have been many debates on how to best make use of digital technologies in the language classroom. In recent years, we see that the digital approach for learning a second language is becoming more accepted, given that the materials used, and activities undertaken in the classroom need to be firmly rooted in real-world contexts.

The fact of the matter is, the normalization of digital tools not only consumes our social and personal life but also how we communicate with each other- therefore extending to language.

The CEFR – seeing learners as social agents, competence orientation together with an action-oriented approach amongst its benchmarks – has developed a clearly defined set of descriptors for competences needed in today’s digital environment. As action-oriented language learning settings are very much focused on real-world relevance, mediation is now seen as one of the key modes of responsible and effective communication. Thus, digital tools are seen as an essential ingredient in language education.

Most recent changes to the CEFR Framework

The idea that language influences identity is something that Prof. Dr. Bernd Rüschoff discussed at our Speexx Exchange conference.

He gave an overview of the recent changes to the CEFR Framework 2020 and how the CEFR is now markedly addressing the difference between “plurilingual” versus “multilingual” concepts.

With these changes to the CEFR Framework, Dr. Rüschoff argued the CEFR is signaling to the language community that plurilingualism is a good thing, something to embrace. We all, according to the new Framework, have a plurilingual repertoire that might actually be very useful in a language classroom – allowing ourselves and our fellow learners to be exposed to and benefit from different ways of approaching or speaking a language.

“We are more aware of how language impacts each of us when communicating in the real world.” – Prof. Dr. Bernd Rüschoff

Also during his talk at Exchange, Prof. Dr. Rüschoff explained that the CEFR Framework is deconstructing the idea of the “native speaker” – “nativeness” is now a thing of the past. This is another good point to consider when thinking on the changes to the CEFR. To be told you need to “sound native” is demotivating. Moving forward, language learners should aim for “general comprehensibility,” or intelligibility, versus “nativeness” – this will have an impact on teaching and learning.

Language coaches are encouraged to ensure their students can understand a variety of accents and even embrace accents rather than trying to precisely mimic them. Again, the “ideal native speaker” is not seen as the ultimate goal anymore; the aim is to develop a linguistic repertoire, in which all language abilities have a place.

When explaining these changes around the idea of “native speakers,” Prof. Rüschoff pointed out that this opens up a tricky question: Who, exactly, is a native speaker?

In Prof. Rüschoff’s opinion, being forced to consider this question is a good thing – we all have different experiences and language repertoires, which is positive and beneficial in a language classroom.

Ultimately, comprehensibility and intelligibility is more important than sounding like a native speaker when it comes to learning a foreign language.

Understanding language ability in relation to the CEFR

Thinking more on language ability, even when it comes to sound recognition and processing – how you hear something or absorb and understand something might be impacted by what you already speak. The CEFR indeed accounts for all this – saying we all need to be able to handle mispronunciations in certain contexts, and be aware of the fact that we each have our own ways of saying and understanding something. 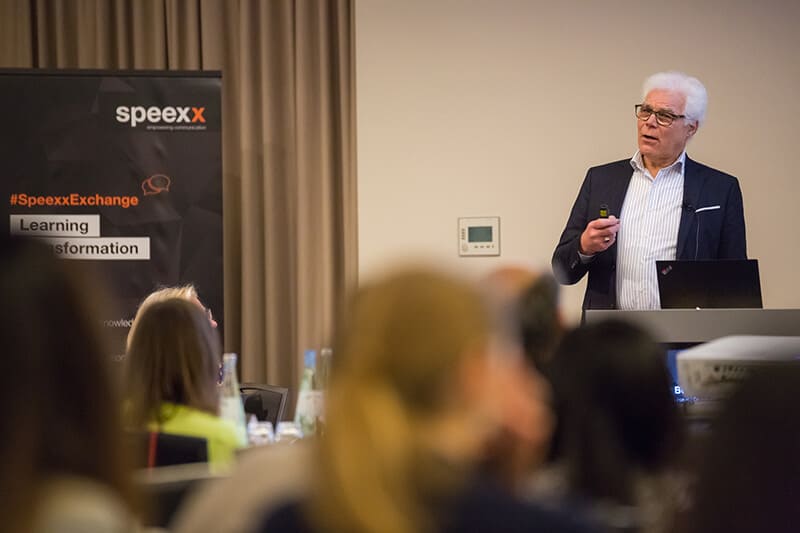 “We have to look at learners as social agents who work in a social context.” – Prof. Dr. Bernd Rüschoff

“Plurilingual” means each of us, as individuals, uses the various languages we’re exposed to – for instance, many of us subconsciously “code-switch,” a very personal thing to do (alternating between languages in the context of a single conversation). We often do this in business contexts – for instance, you may choose to use an English term such as “artificial intelligence” even when you’re speaking German at work.

Generally, everyone mediates what they want to say, depending on the format – how you write and the words you use for an email will be different from how you compose a tweet, for example.  Just one more thing to consider when thinking of the amazing language abilities we humans have.

A recent Scientific American article discussed this, noting that psycholinguistics researchers have demonstrated that what we pay attention to – how our eyes move, what we look at – is influenced in direct, measurable ways by the languages we speak. For example, Russian-English bilinguals who hear the word “marker” may look at a stamp, because the Russian word for “stamp” is “marka.”

People often do this in one language – an English speaker hears “candle,” and may look or think of “candy” – but it’s interesting that bilinguals naturally do this across two languages.

This shows us that language ignites a complex degree of interactivity between words and concepts, but also impacts vision, attention and cognitive control.

Thus, “multilingualism” only describes one’s ability to speak many languages proficiently, while plurilingualism is the ability of a person who has competence in more than one language to switch between various languages depending on a given situation(hence the code-switching, or personal applications to language).

The main difference between the two: A multilingual approach accounts for different languages coexisting next to each other, but separately (with the aim of achieving native speaker-like competency for each language). In contrast, plurilingualism emphasizes communication skills that draw on all of our linguistic and cultural experiences.

Back to language and identity: While the CEFR still sees phonological control as a linguistic competency (language learners need, to some extent, to vary intonation and place stress on certain words to be intelligible in a given language), Dr. Rüschoff says these new updates show that the CEFR (evident by its updated descriptors) accepts the fact that whatever you say is already impacted by the languages you speak. But as long as you can still pronounce intelligibly, this should suffice.

A “pluricultural repertoire” (ability to use languages to communicate but also take part in intercultural interactions, especially when an individual has proficiency in several languages and experiences of several cultures), embedded in the CEFR descriptors, notes that people do, indeed, change identities somewhat when they speak different languages. Ever so slightly, and subconsciously, depending on the context. 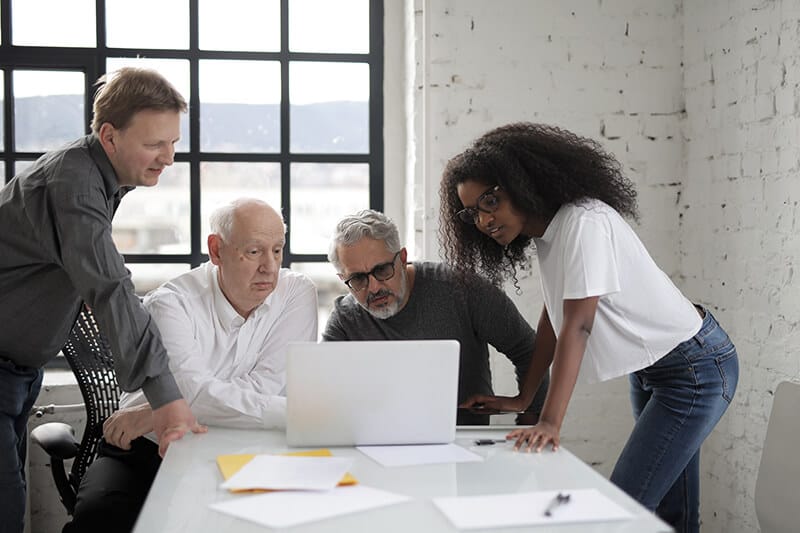 Digital language learning in the future

Prof. Rüschoff believes digital language learning might be easier, and learners more motivated, as the CEFR continues to move away from a system focused on the on things learners don’t know yet and still need to learn, which is demotivating (“You don’t know this; you have to learn it!”).

What’s likely to be more effective is a system that encourages people to already use the new language they’re learning, and points out that even at the beginner level you can already introduce yourself, which can provide you, as an amateur learner, with positive reinforcement. 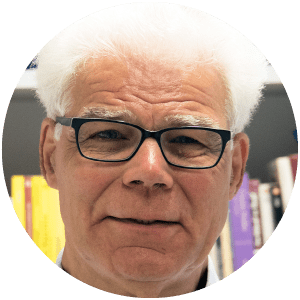 Prof. Bernd Rüschoff has a long track record in international projects, both EU and Council of Europe. On behalf of AILA, he is a member of the Professional Network Forum, a think tank at the CoE’s European Centre for Modern Languages – ECML – in Graz. He obtained a PhD in Linguistics at the University of London and since then, his research focus has been on applied linguistics and second language acquisition as well as Technology Enhanced Language Learning (TELL).

He also held a professorship in Technology Enhanced Language Learning (TELL) at the Pädagogische Hochschule Karlsruhe, where his research focused on aspects of second language acquisition and TELL exploitation based on cognitive-constructivist approaches. Prof. Rüschoff is a former President of AILA – the International Association for Applied Linguistics and of GAL – the German Association for Applied Linguistics. He also is a past-president of EUROCALL – the European Association for Computer-Assisted Language Learning.

If you’re interested in learning more about the CEFR Framework and how it applies to your language training programs, check out our Masterclass Webinar with Prof. Dr. Bernd Rüschoff, Senior Professor at the Institute for Anglophone Studies at Duisburg-Essen University here: The CEFR Descriptors and Framework
– Online Interaction and Digital Tools in the Language Classroom.

In this exciting webinar, we discussed the relevant CEFR descriptors and suggestions as to their impact on how digital tools can and must become a resource for language learning as common as textbooks.

About the Author: Sarah Sullivan